Taste: My Life Through Food by Stanley Tucci 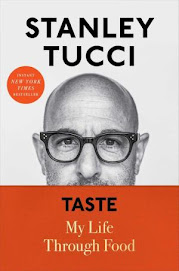 Taste: My Life Through Food by Stanley Tucci
304 Pages
Published October 2021 by Gallery Books
Publisher's Summary:
From award-winning actor and food obsessive Stanley Tucci comes an intimate and charming memoir of life in and out of the kitchen.

Stanley Tucci grew up in an Italian American family that spent every night around the kitchen table. He shared the magic of those meals with us in The Tucci Cookbook and The Tucci Table, and now he takes us beyond the savory recipes and into the compelling stories behind them.​

Taste is a reflection on the intersection of food and life, filled with anecdotes about his growing up in Westchester, New York; preparing for and shooting the foodie films Big Night and Julie & Julia; falling in love over dinner; and teaming up with his wife to create meals for a multitude of children. Each morsel of this gastronomic journey through good times and bad, five-star meals and burned dishes, is as heartfelt and delicious as the last.

Written with Stanley’s signature wry humor, Taste is for fans of Bill Buford, Gabrielle Hamilton, and Ruth Reichl—and anyone who knows the power of a home-cooked meal.
My Thoughts:
Print = recipes
Audio = Stanley Tucci reading the book
Stanley Tucci may have helped me break my months' long reading slump with this book and I needed it to be in print, in a book that I held in my hands as I turned the pages. Plus, the recipes - I have so many new recipes to try! But can I tell you how sad it also makes me that I didn't get to hear Tucci reading this book?  So, here's my recommendation to you - checkout the physical book AND the audiobook so you get the best of both worlds. If you don't want to do that, do yourself a favor and at least check out some form of this book - I promise you will not be disappointed.
Yes, it's very much a book about food and the role that food has played in Tucci's life. But it's also a book about family, about growing up in the sixty years ago in suburbia, about surviving lockdowns during a pandemic, about loss and love and friendship. And it's funny. Really. Tucci is a funny, self-deprecating guy. 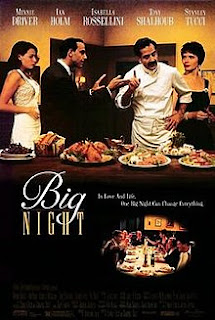 My earliest recollection of Stanley Tucci is from his 1996 film Big Night, a movie he wrote and co-directed about two Italian brothers struggling to keep their restaurant afloat. It's a gem which I cannot recommend highly enough and which forever linked Tucci with food for me. It didn't surprise me in the least to find his CNN series, Stanley Tucci: Searching For Italy, a series where he is something of a foodie tourist.
It's only fitting that Tucci should find himself on a television show about food. He grew up watching cooking shows with his mother, a woman who never cooked a bad meal, according to Tucci. He writes about family meals growing up, food on the sets of movies, restaurants he has frequented in his travels, and the meals he's prepared. Many of those meals have been enjoyed with famous friends; even as he's dropping those friends' names, Tucci is mocking himself for doing it. But hey, if you count Meryl Streep, Ryan Reynolds, Campbell Scott, Tony Shalhoub, and Colin Firth, I guess you're entitled.
Now in his sixties, Tucci finds that food and the act of preparing it and eating it have overcome his previous passion of acting. When you get to the end of the book, you'll know why it has taken on an even greater importance for him in the past few years but I don't want to spoil that for you. Because I'm really hoping that you'll pick this one up.
And now I need to go watch everything Stanley Tucci has ever been in because I feel like we're friends now. And, to be honest, I find him kinda sexy - I mean, he can cook, he's funny, and he dresses impeccably; what's not to love?
Posted by Lisa at 1:30 AM
Email ThisBlogThis!Share to TwitterShare to FacebookShare to Pinterest
Labels: book review, cookbook, food, humor, library, memoir, nonfiction